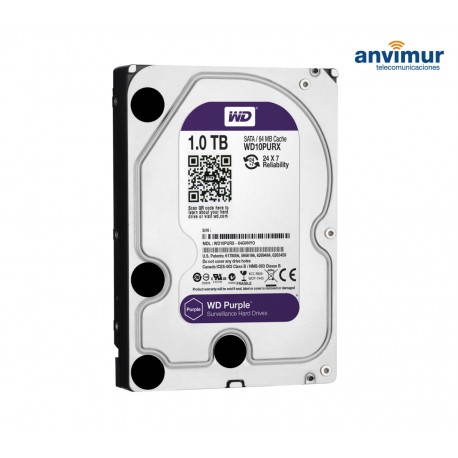 Hard Drive with a capcity of 1TB WD Purple

WD Purple Surveillance Storage is built for 24/7 always-on surveillance in high-definition security systems that use up to eight hard drives and up to 32 cameras. Exclusive AllFrame™ technology works with ATA streaming to reduce error pixilation and video interruptions that occur when desktop hard drives are incorrectly used as storage in security systems.

The right drive for the right job

WD Purple™ drives have been engineered specifically for surveillance, so they’re able to withstand the extreme heat fluctuations and equipment vibrations within an DVR environment. An average desktop drive is built to run for only short intervals, not the harsh 24/7 alwayson environment of a high-definition surveillance system. A disruption to a drive could result in a failure that impacts multiple users, your security archive, or even the entire system. With WD Purple™, you get reliable, surveillance-class storage that’s tested for compatibility in a wide-range of security systems.

WD Purple surveillance-class hard drives are equipped with AllFrame technology which works with ATA streaming to reduce frame loss, improve playback and increases the number of drive bays supported. AllFrame reduces video interruptions that commonly occur when desktop hard drives are incorrectly used as storage in security systems. Missed frames and lost footage is a serious problem when an event occurs and surveillance footage needs to be retrieved. WD Purple with AllFrame provides the confidence you should expect when it’s time to play back and review critical surveillance footage.